Make Holidays Greener Week 2-9 July 2011: Travel Tips for Getting There 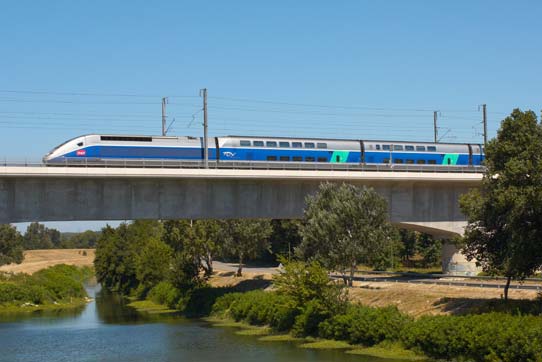 There’s no question that if we can reduce the amount we fly, then we’re being kinder to the environment. For a holiday in Europe, using the continent’s extensive rail network is a fantastic alternative to flying.

It’s not just the CO2 that we have to worry about. Aircraft emit a wide variety of gases, many of which contribute to global warming and being at high level, they’re emitted right into the atmosphere.

The benefits are not just environmental. Here are 5 additional reasons why travelling by train is a must:

You only have to think about airport check-in desks, passport control and baggage queues and the word STRESS comes to mind.

It can save time

Unlike airports, train stations are usually right in the heart of the city. No check-in times, no baggage queues. So your holiday can start straight away. And with the increase of high-speed trains around Europe, journey times are now much shorter. It just takes around 3 hours to travel from Paris to Marseille or Paris to Geneva.

It can save money

Saving money on trains when compared to flying is about timing. Eurostar can be booked 4 months in advance and European train tickets 3 months in advance, but of course, there are some very low air fares if you book much earlier. However, factor in admin, baggage fees, seat booking fees, not to mention card charges and cost of transfers and the difference in price may not be as much as you think and can be cheaper.

You see more of the world

There’s nothing better than just looking out of the train window. Flying over Europe means you miss out on spectacular scenery and being able to watch the world go by.

It adds another experience to your holiday

Unlike flying, travelling by train is not just about a means of getting from A to B. Train travel can add another dimension to your holiday. As an example, a sleeper train from Bologna to Paris became a ‘Hogwarts train adventure’ for my children!

Train travel is a serious alternative to flying for European holidays, so why not give it a go next time?

Tweet
This entry was posted in Thoughtful travel, Travel Tips and tagged holidays by train, Responsible Tourism. Bookmark the permalink.